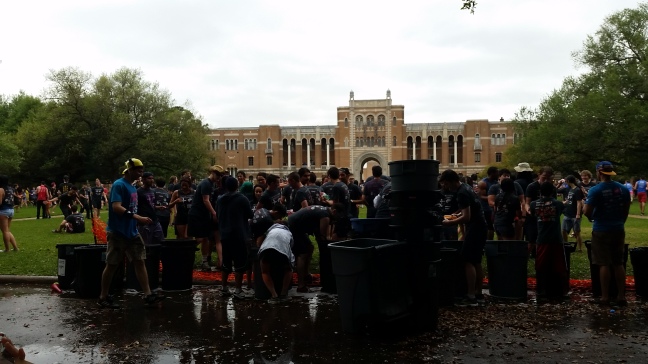 One of the main events at Beer Bike is the full-school water balloon fight, during which hundreds of undergraduates run around Founder’s Court to pelt their friends with water balloons. What is the carbon footprint associated with all of the water and balloons that are consumed on this day?

I estimate that my residential college (Martel College) filled about fifteen 55-gallon trash cans with water balloons in preparation for the biggest battle of the year.

Water: The water filling the trashcans and balloons alone is over 800 gallons of water from the municipal water supply, or 14 kg of CO2 emissions (not even counting water that was wasted while filling and transporting the balloons).

Balloons: The balloons themselves (estimated 5 kg latex) represent another 2.5 kg of emissions, with an emission factor 0.54 kg CO2eq/CO2 latex (for latex produced on long-cultivated lands in Thailand, which is an assumption). This doesn’t even include the carbon involved in processing this latex to form balloons, packaging, and transportation.

On Campus Transportation: The balloons were driven from Martel College to Founders Court. The distance itself isn’t all that far – maybe three-quarters of a mile one-way if we’re being generous – but it is a factor. Assuming an emission factor of 161.8 g CO2/short ton-mile, transporting the balloons emits 0.36 kg CO2eq.

TOTAL for Martel College water balloon production and preparation: 17 kg CO2eq, or about 40 miles driven in my 2001 Honda CRV. The grand total for the university is at least 11 times this amount (there are 11 residential colleges, most of which fill many more balloons than Martel) – almost 200 kg CO2eq, or 450 miles in my car.